The Berger de Beauce, also called Beauceron or <<Bas Rouge>> (red stocking) is a dog of harmonious proportions, strong, with short coat. Height is about, 65 to 70 cm for males, 61 to 68 cm female.
It is a powerful dog with a solid bone structure. Muscles are well developed without being heavy. The head is rather long. Look is franc, expressing liveness and brightness.
Natural ears droop. On the inner side of rear legs the Beauceron <<dewclaws>> more or less developed. The tail is long, forming a slight hook in the end. The coat is smooth on the head and legs, short, thick and firm on the body.
The most common colour is <<black and tan>>. Tan makes high stockings on legs toning down progressively as going up. Tan is also present on both sides of muzzle, above brow ridge, on the chest, under the neck and tail. Some black marks called <<charbonnures>> (coal marks) can exist on the legs.
These are the characteristics of the Beauceron or <<red stocking>>. There is a second variety called <<arlequin>&gt. The coat has black and grey (blue) hair with tan mark. Black and grey in equal parts.
In addition to his aptitudes as a guardian or as shepperd dog, the Berger de Beauce is a very clever and polyvalent dog. It is a faithful dog, affectionate (and loving) towards family.

The French Club publishes a trismestrial magazine with colour pictures.

You may send your subscription with your name and address to:

You can find further information through the topic <<Liens>> on this site which is linked to the clubs in different countries and languages.

DATE OF PUBLICATION OF THE ORIGINAL VALID STANDARD

: "Beauce Dog", "Beauceron" and "Red-Stocking" were the names chosen at the end of the XIX century to designate these ancient French Sheepdogs of the plains, all of the same type, with smooth hair on the head, a harsh, short coat and ears normally cropped. The body had tan markings, notably at the extremities of the four legs, which led the breeders at that time to call these dogs "Red-Stockings". The coat was commonly black and tan but there were also grey, entirely black and even wholly tan dogs. These dogs were bred and selected for their aptitude to conduct and guard flocks of sheep.

: The Beauce Sheepdog is big, solid, hardy, powerful, well built and muscular, but without lumber.

: The Beauce Sheepdog is medium in all its proportions. The length of the body from the point of the shoulder to the point of the buttock should be slightly greater than the, height at the withers.

The head is long : 2/5 the height at the withers. The height and width of the head are slightly less than half its total length. The skull and muzzle are of equal length.

: Franc approach and self-assured. The expression is candid, never mean timid or worried. The character of the Beauceron should be gentle and fearless.

: The head is well chiselled with harmonious lines. Seen in profile, the top lines of skull and muzzle lie roughly in parallel planes.

: Flat or slightly rounded from one side to the other. The median groove is only slightly marked, the occipital protuberance can bc seen on the summit of the skull.

: The stop is only slightly pronounced and is equidistant from the occiput and the end of the muzzle.

: Neither narrow or pointed.

: Firm and always well pigmented. The upper lip should overlap the lower without any looseness. At their commissure, the lips should initiate a very slight pouch which should stay firm.

: Strong teeth with a scissor bite.

: Horizontal, slightly oval in shape. The iris should be dark brown, and in case never lighter than dark hazel even if the tan is light coloured. For the harlequin variety, wall eyes are admitted.

: High. Ears are semi-raised(semi-drawn up) or falling. They must not be stuck to cheeks. They appear flat and rather short. The length of the ear must be equal in the middle of the length of the head

: Muscular, of good length, united harmoniously with the shoulders.

: The back is straight. The loin is short, broad and well muscled. The croup is only slightly inclined.

: The girth of the chest is greater than the height at the withers by more than one fifth. The chest is well let down to the point of the elbow. It is wide deep and long.

: Whole, carried low, it reaches at least to the hock, without deviating, forming a slight hook in the form of a " J". When in action, the tail can be carried higher, an extension of the top line.

: Upright when seen from the front or in profile.

: Large, round, compact. The nails are always black. The pads are hard but nevertheless resilient.

: Upright when seen from profile and from behind.

: Substantial, not too close to the ground, the point situated roughly at 1/4 the height at the withers, forming a well open angle with the second thigh. Metatarsals (Rear Pasterns) : Vertical, slightly further back than the point of the buttock.

: By tradition, shepherds are much attached to the conservation of double dewclaws. The dewclaws form well separated "thumbs" with nails, placed rather close to the foot.

: Supple and free. The limbs move well in line. The Beauce Sheepdog should have an extended trot with long reaching movement.

: Smooth on the head, short, thick, firm and lying close to the body, 3 to 4 cm in length. The buttocks and the underside of the tail are lightly but obligatorily fringed. The undercoat is short, fine, dense and downy, preferably mouse grey, very close, and can't be seen through the top coat.

a) Black and tan (Black with tan markings) : "red stockings". The black is pure black and the tan, red squirrel coloured. The tan markings are distributed as follows

• Spots over the eyes.

• On the sides of the muzzle, diminishing gradually on the cheeks, never attaining under the ear.

• On the chest, preferably two spots.

• On the legs, disappearing progressively while rising, without covering in any case more than 1/3 of the leg and rising slightly higher on the inside.

b) Harlequin (blue-mottled with tan markings) : grey, black and tan, the coat being black and grey in equal parts, the spots well distributed, with sometimes a predominance of black. The tan markings are the same as for the black and tan. 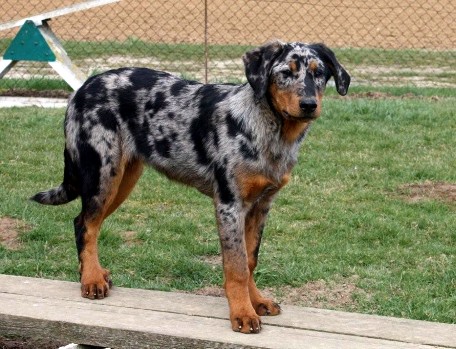 A faint whit spot on the chest is tolerated.

: Any departure from the foregoing points should be considered a fault and the seriousness with which the fault should be regarded should be in exact proportion to its degree.

• Size outside the standard limits.

• Eyes too light, or wall eyes (except for harlequins).

• Split nose, of a colour other than black, with unpigmented areas.

• Overshot or undershot with loss of contact, absence of 3 or more teeth (the first premolars not counting).

• Simple dewclaws or absence of dewclaws on hind legs.

• Shortened tail or tail carried over the back.

• Coat : Colour and texture other than those defined by the standard. Complete absence of tan markings. Shaggy coat. Well defined, quite visible white spot on chest. For the harlequin variety : too much grey, black on one side and grey on the other, head entirely grey (absence of black).

Any dog presenting in a obvious way anomalies of physical or behavioral order will be disqualified.

: Male animals should have two apparently normal testicles fully descended into the scrotum.